Recently in Jamaica Queens a homeowner had been experiencing an increase from the normal monthly sewer backups and decided to have a licensed plumber perform an inspection on the line. The plumber was able to clear the blockage using a water jet and decided to insert a video camera for a more detailed inspection. He was quick to conclude that the monthly backups were caused by a back pitched sewer line.

As you can see in the above video, the camera goes underwater when entering the pipe and clearly comes out of the water at 16’ which proves that there is a pitch problem. If the camera was underwater for the entire length of the sewer line, it would force us to perform an additional investigation and see what is causing the backup. 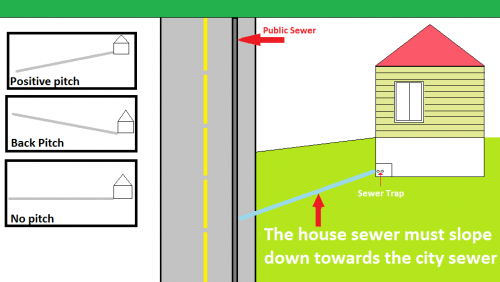 If the initial problem is under the street or if there is a secondary problem in the street, the homeowner is forced to replace the entire sewer line to correct the back pitch.