As we prepare for the winter it is important to start taking the necessary steps in order to protect your water main against freezing. There are a few important steps to be mindful of to prevent against your pipes from freezing or leaking:

1. The first step that most people are not aware of includes leaving a small stream of water in one of the faucets on your top floor. This step can save people thousands of dollars, and time without water if managed properly. All you have to do is slowly open the faucet and leave a small and steady stream of water running during freezing conditions. selecting the exact time to leave the water running is not a perfect science, this is partially dependent on how your house was constructed, insulated and how cold your pipes will get. It is best to be safe and if you have a feeling that your pipes may freeze, you may as well leave the water running. There is nothing worse than waking up to no water, especially when there was an easy fix!

The theory behind leaving a slow stream of water is that moving water will never freeze and as long as the water is running, your pipes will not freeze

2. Another suggestion is to make sure that your basement, crawl space or electrical closet is heated. It is common that these areas are not included in part of the home heating system and as a result, they get extremely cold during winter months. The freezing areas of your home may lead to frozen pipes. In this case we suggest insulation and even a space heater if you can set it up safely.

In other scenarios, we have experienced our customers installing heat tape on the pipe after experiencing issues with their water main. A few years ago we had a customer whose water main was running directly above the subway station, which caused the pipes to freeze. There was really no way from this happening again since they could not move the subway, and there was no other location to install their pipe from the street. As an extra measure, they had their electrician install heat tape on the pipe where it entered through the foundation wall. The very next winter the pipes were free of any freeze and they did not have any loss of water the entire winter.

We also had a customer attempt to defrost their frozen water line with a heat gun which did not end as well. Long story short, the old lead water main burst which resulted in a flooded basement. The customer now had to hire an emergency crew to open the roadway, close the water connection and replace the lead pipe with copper.

Another recent scenario took place in Texas. The property owner had been in the house for several years with no issues. Last winter Texas experienced a winter like no other, they actually had a snow storm for the first time in a decade! The property owner had not changed anything in the house however, the house was not built to handle freezing conditions and his pipes had froze. Luckily for him, it was not a deep freeze and the pipes had defrost in one day.

Most people tend to ignore the possibility of a frozen water main until they actually experience an issue. We strongly suggest to consider the facts discussed in this article and try to avoid any problems this winter! 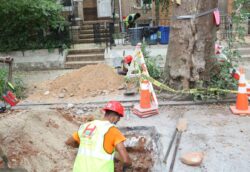 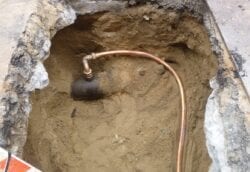 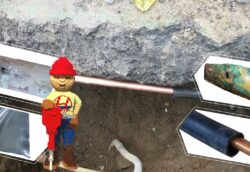