Late Saturday evening Lusardis Italian Restaurant was issued with a DEP 3 day notice. The restaurant owner was baffled; he had not experienced any water leaking on the sidewalk, in the basement or a loss of water pressure. The owner was aware of a large sinkhole that had been forming in the roadway over the previous 6 months. The city had been continuously adding blacktop to the sinkhole which led the owner to believe that everything was under control.

The buildings management company is a longtime customer of Harris Water and decided to call for a second opinion on Sunday morning. Harris performed a sound test on the water line which confirmed that the water main was leaking in-between the roadway and the building. Harris also observed that the existing 2” water line was made of galvanized pipe which is illegal to repair.  The entire pipe had to be replaced with new 2” copper pipe from the opposite side of 2nd ave, totaling 70’ of new pipe. The roadway sinkhole was getting progressively worst and the restaurant was being pressured to have the work done immediately.

Harris arrived on site to begin excavation at 8 AM the next morning. The first step was to stop the water from undermining the roadway. Harris began excavating at the city connection to locate the tap, and turn off the water line.

**A tap connects the property owner’s pipe to the city pipe. The tap also controls the amount of water pressure entering the private water main.

The onsite crew began digging at the point of the roadway sinkhole while the tap was being located. The leak had caused a large portion of the soil to washout underground, creating the large undermining condition in the roadway. After 90 minutes of digging, the water was turned off and the new pipe installation process had begun. There were 3 holes made for the new pipe installation, two in the roadway and one on the sidewalk. Tunnels were made from one hole to the next using compressed air and at this point the new copper pipe is pulled from one hole to the next.

The entire copper pipe installation was completed by 6 PM.  Being that 2 Ave has been resurfaced within the previous 5 years, it is considered a “protected roadway”. All protected roadways require a compaction testing of the soil as it is being back-filled into the roadway. The compaction tester is measuring the density and moisture of the new dirt going back into the hole, while a DOT inspector is on the site to watch the process. The compaction testing process was completed by 7:30 PM and all of the holes were left with temporary asphalt before the final restoration was completed the very next day. 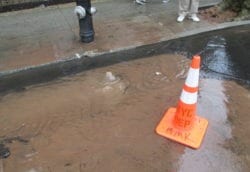 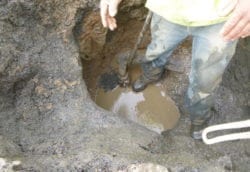