It is too often that a property owner will repair a portion of their sewer line and not replace the entire pipe at once. The primary reason for a partial replacement is usually cost. It is understandable that a full sewer line replacement is very expensive and you may want to save money by replacing a section of the sewer. It is very important to understand the pros and cons before making what may be one of the biggest decisions for your home.

Replacing your entire sewer line at one time, is considerably less expensive than replacing the sewer in sections over a few months or years.

Example: Mrs. Smith opted to repair a section of her sewer in the roadway last month for $12,000. This included the total cost for excavating, replacing 15′ of pipe and paving the roadway. Mrs. Smith was happy to have saved thousands of dollars with the repair, and now had what appeared to be a fully functional sewer. Six months later she started to experience sewer back ups again. She was confused after spending thousands of dollars for her recent repair and never expected to have a sewer back up again. She immediately called the company that repaired her sewer and requested that the sewer is cleared out.

Upon snaking the the company started to hit an obstruction below her front yard and quickly concluded that another section of her old sewer line had failed. Mrs. Smith was now faced with another expensive bill to repair the sewer in another location. By the time she was completed with the next repair she had already spent the same amount of money as if she would have replaced her sewer line at one time. In addition, she still had another section of old pipe below the sidewalk. There is still a possibility that this old section of sewer pipe can fail in the future, which would result in additional cost.

If the entire sewer line was replaced from the start Mrs. Smith would have had piece of mind, in addition to saving money! It is always suggested to speak with a licensed plumber before making decisions on repairing your sewer line. There are too many factors to consider that the laymen will not consider. It is also important to understand that your licensed plumber should make a site visit to the house, discussing your sewer problem on the phone is not enough! 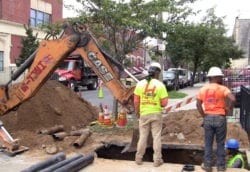 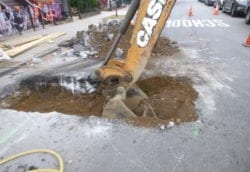 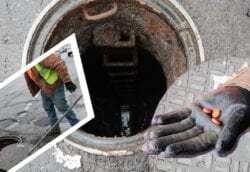