There are a few reasons why a someone would inquire about a curb valve replacement.  The most common reason would be if the existing OS&Y valve does not work on the inside of the building and at that time they try to utilize the curb valve, which does not function. Most people assume that the replacement is an easy task, excavate below the sidewalk and replace the valve.

One important fact that most do not consider, is that you must stop the water flow from the city main. The only way to stop the water flow is to excavate in the roadway, close the city connection valve and once turned off the existing curb valve can be removed. In some cases the city connection valve may not work, this would require a much larger job as well as getting the city involved to close the city water main.

In the event that the city connection valve does work, your plumber can close the valve in preparation for the new curb valve. In most cases the new valve will be installed as a direct replacement of the existing and a formal inspection will be conducted by the city inspector.

Another variable to be mindful of is if the existing pipe is in poor condition and too brittle for a new valve installation. It is extremely risky and even dangerous to work on in poor condition. In this case, it is always suggested that the entire pipe is replaced which will allow for another 50 years of use without any issues.

If you are planning on operating a curb valve it is important to have a professional assist to avoid any damage to the valve. It is common that a “plumber” attempts to operate a curb valve and actually does more damage than help. The valve may have closed but needed to be worked by a professional that has experience. Some curb valves require the be worked back and forth at a slow pace to slowly open the valve and if forced in either direction, the stem of the valve may snap.

It is very important to consult with a licensed professional before operating a curb valve to avoid any unnecessary damage or cost. 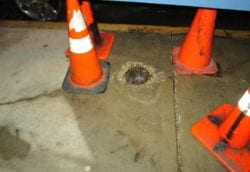 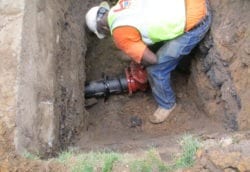 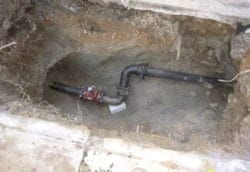