Harris Water Main & Sewer Contractors first had to submit all of the required plans for approval before obtaining the highway permit and the DEP water permit to begin excavation for the new main.  The Cross Connection Plan, DOB plan and the plumbers meter application were submitted and approved within one week’s time.  The DEP water permit and DOT highway permit were released just a few days later along with the DEP scheduled to install the new wet connection  the following Monday.

The layout of this particular job required a parks department permit along with having an ISA approved arborist on-site to protect the city trees throughout the excavation process.  Harris first made sure that all required tree protection was built around the tree before they started to dig.

The entire job was excavated on the first day, including preparing the city water main for the DEP to install the new wet connection.  After the wet connection was successfully installed, Harris installed the pipe from the roadway up to the sidewalk where the new curb valve is installed as per DEP requirements.  The DEP inspector arrived at the hospital by 3pm and approved partial inspection up to the curb valve, along with the plug of the old 3” water main.

The installation crew had another 35’ of pipe to install from the curb valve into the buildings sprinkler room which was located 20’ back from the foundation wall.  The remainder of the pipe was installed on the third day of the installation process before it was approved and signed off by the DEP inspector.

The Harris family has been serving Queens and all of their water main and sewer needs for over 95 years.  If you are experiencing a plumbing problem in a commercial or residential house, contact Harris Water for advice or a free estimate at 718-495-3600. 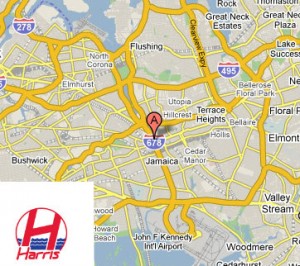 During the American Revolution General Benedict Arnold drilled his troops in the area, on the current location of M.S. 216. During the 19th century, Fresh Meadows was a farming community known as Black Stump. The name derives from the convention of defining property lines by placing blackened tree stumps at the edges of properties. A few such boundary markers are still visible in the undeveloped areas of Cunningham Park along 73rd Avenue.

Black Stump School was located at present-day Utopia Playground, at 73rd Avenue and Utopia Parkway. For several years, the woods of Black Stump were rumored to be haunted because people heard strange sounds coming from the woods. In 1908, the mysterious sounds were discovered to be coming from a recluse who lived in a small hut and sang Irish folk songs at night.

Fresh Meadow Country Club opened in 1923. The country club was named after an area northeast of Flushing even though it was actually located southeast of Flushing, just south of what is presently the Long Island Expressway near 183rd Street. The golf course was designed by A.W. Tillinghast. The PGA Championship was held at Fresh Meadow Country Club in 1930, and the U.S. Open was held at the course in 1932. In 1937, the golf course hosted a charity game between John Montague, Babe Ruth, Babe Didrikson, and Sylvania Annenberg, a game that was watched by 10,000 fans, some of whom rushed the golf course and left Babe Ruth’s shirt in tatters.

Until 2004, the neighborhood was home to Klein Farm, the last surviving commercial farm in New York City, located on 73rd Avenue between 194th and 195th Streets. Efforts by local residents and civic officials to see the farm reopen are currently under way.

In October 2011, a book written by Fred Cantor and Debra Davidson that chronicled the history of Fresh Meadows was released.